Once I sight ATM card codes ,i can empty any account _Nigerian fraudster confessed 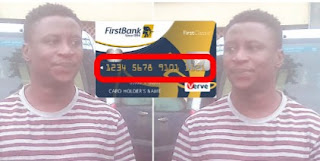 A 33-year-old suspected fraudster, Olawale Aderibigbe, who was paraded by the Lagos state police command, yesterday told the police he uses only the security code of Automated Teller Machine (ATM) card to withdraw all the money in any of his victim’s account.
Parading the suspect before newsmen, the state Commissioner of Police, Zubairu Muazu, said Olawale is a member of a syndicate that specializes in robbing people of their ATM cards and afterwards, stealing from their accounts.

“The suspect confessed during interrogation that he and his partners had stolen money from many peoples’ accounts through ATM cards, which they stole from people at gunpoint. We are working assiduously to track down other members of the gang and brought them to book.” Zubairu said


Aderibigbe told journalists that he could withdraw money using any ATM card as long as the card had security code.

“The security code is what I need. I have software. If I insert the security code, details of the person would come out and the amount the person has in the account. My colleagues and I have made money through this.” he said


Olawale who did not appear remorseful, said he was on his way from his house to go and pick up another ATM card from one of his gang members when he was accosted and arrested by the police.

“My friend called me that he had another ATM card. I was going there when police arrested me,” he said


The commissioner said that efforts are being made to arrest other members of the gang that are currently at large.

By Rayesomo Charles at March 07, 2019
Email ThisBlogThis!Share to TwitterShare to FacebookShare to Pinterest