I don't drink , smoke nor do drugs_slimcase claims 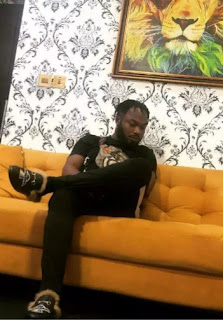 Popular Nigerian singer, Slimcase has revealed that though many people think he might be involved in a lot of smoking, drinking and drug abuse, he actually isn’t.


In a chat with Vanguard, the “Azaman” singer said that contrary to popular belief, he is not involved in the above-mentioned acts.

In his own words,

“I don’t smoke, drink alcohol or do drugs I am only a good actor”, he asserted.


However, he stated that though he doesn’t take alcohol, it is not a sin.

“Taking alcohol is not a sin, but drinking to stupor is a sin.”


Speaking further, he reacted to criticisms that he is yet to prove himself a musician worthy of note:

By Rayesomo Charles at March 31, 2019
Email ThisBlogThis!Share to TwitterShare to FacebookShare to Pinterest