Shi’ite Protest: Members of Shi'ite clash with Police during their protest at the Central District of Abuja calling for release of their Leader El ZakZaky . Photo by Gbemiga Olamikan.
The Police Command in Edo, on Friday said it rescued no fewer than 20 kidnap victims across the state in the last two weeks.
Commissioner of Police in the state, Mr Olusegun Odumosu, disclosed this in Benin while briefing journalists on the command’s achievements during the period.
Odumosu also revealed that 83 suspects were arrested for various crimes in the state, adding that 55 of them were held in connection with cultism, and 15 suspects for armed robbery.
He said that 11 suspects were arrested for alleged murder, and that the murder suspects included five persons arrested in connection with the murder of a police officer in Benin metropolis on Saturday.
He added that 10 arms and ammunitions and 55 live cartridges were recovered from suspects during the period.
“Also recovered within the period were six vehicles, two battle axes and cash of N200, 800.”
Odumosu said that some of the suspects had been charged to court, while cases of others were still being investigated preparatory for prosecution.
He, however, advised people with domestic staff to put the staff under watch, saying that the issue of pants and pad rituals were gradually creeping into the state.
According to him, so far, one suspect has been arrested and the suspect has made confessional statement. 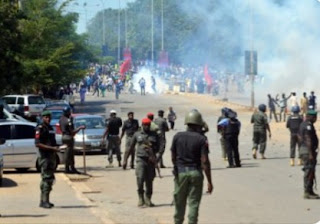 By Rayesomo Charles at February 01, 2019
Email ThisBlogThis!Share to TwitterShare to FacebookShare to Pinterest