My first time in aeroplane,i thought i would die_Woli Agba 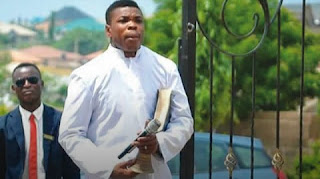 Popular comedian, Ayobami Ajewole, a.k.a Woli Agba, has just confessed that he had a real scare the first time he flew in an aeroplane. That was some years ago, when the Alfa Sule Dance Troupe gave him an opportunity to travel by air from Lagos to Abuja for the first time in his life.
He said, “It was really the first opportunity I had to travel out of the country.  We went to South Africa. It was also the first time I would enter a plane. In fact, I didn’t even know that one could travel by air from Lagos to Abuja.
“When the plane took off, I was smiling inside me. Suddenly, the pilot announced that the plane was in a sort of trouble. It was not funny. There and then, I told God that He didn’t bring me on the journey to waste my life. I thought I was going to die. Fortunately, nothing happened. The plane didn’t crash. I was so happy and relieved when we eventually arrived in South Africa.”
Woli Agba admitted that at a point in his career, he felt that he had been forgotten as an entertainer and there was nothing for him to fall back on. “People stopped talking about us at a point and I didn’t have anything to fall back on. I felt as if I had used up all my glory and there was nothing left for me. I was preparing to get married at the time. But from nowhere, things started working out for me again,” he said.
On his relationship with female fans, the humour merchant claimed that he had never received sexual advances from his female fans. “Ladies respect me whenever they see me. They call me Woli Agba and daddy. Even when I attended Olamide’s concert, they came to me and started calling me daddy. Ladies don’t see me as a young guy they can relate to or entice. I get direct messages on social media from ladies, but I value my marriage and my home comes first. I am too focused to be distracted.”

By Rayesomo Charles at February 01, 2019
Email ThisBlogThis!Share to TwitterShare to FacebookShare to Pinterest