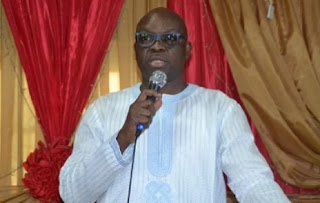 Immediate past Governor of Ekiti State, Ayodele Fayose, has revealed alleged plans by the All progressives Congress, APC, to postpone the Saturday’s presidential and national assembly elections.


The former governor added that the leadership of the APC was presently in a meeting in respect to that.


According to him, APC plans to use incidences of INEC offices burnt in Imo, Anambra and Plateau States as excuse to move the election.


Fayose tweeted: “leadership of APC now in a crucial meeting.


“They are considering postponement of Saturday’s elections till 2nd week of March, using burning of INEC offices in Anambra, Abia and Plateau States as well as insecurity in some states as reasons.”


DAILY POST recalls that the headquarters of the Independent Electoral Commission, INEC, in Awka, the Anambra State capital on Tuesday caught fire

The Independent National Electoral Commission confirmed that a total of 4,695 card readers were destroyed in the fire that gutted the containers, where they were kept at the Anambra State office.
Source:Daily post

By Rayesomo Charles at February 13, 2019
Email ThisBlogThis!Share to TwitterShare to FacebookShare to Pinterest