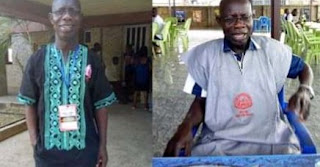 Prof. Monday Igbafen, the ASUU chairman at Ambrose Alli University (AAU) has been suspended by university authorities over allegations of sexual assault.


In a report by Daily Post, Igbafen, an Associate Professor of the Department of Philosophy, was suspended after his appearance before a disciplinary committee on allegations of sexual misconduct.


This was made public in a statement signed by Edward Aihevba, the university’s spokesman, on Wednesday in Benin, Edo State capital.


The statement noted that Igbafen had been arraigned before the Senior Staff Disciplinary Committee (SSDC) on allegations of gross misconduct bordering on sexual harassment and threatening students to have sex with him in exchange for marks.


According to the statement, Igbafen was found culpable by the university’s investigative panel.


A relative of one of the victims had threatened to take the institution to the Independent Corrupt Practices and Other Related Offences Commission ICPC if Igbafen wasn’t prosecuted.


The statement reads in part:


“The university community is hereby informed that Dr. M. L. Igbafen, Associate Professor in the department of philosophy, has been suspended from duty, following his arraignment before the Senior Staff Disciplinary Committee (SSDC) on allegation of gross misconduct bordering on sexual harassment and threats of marks for sex.


He had earlier been accused of this offence and an investigative panel set up, which found him culpable and indicted. Recently, there was petition by the family of the female student involved, asking that Dr. M. L. Igbafen be brought to book, failing which the university management would be reported to ICPC for failure to act.


On receipt of the petition, the University management asked for his comments. His response was found unsatisfactory. He was therefore arraigned before the senior staff disciplinary committee (SSDC)…As due process demands, he has been suspended from the university, pending the determination of the allegation leveled against him.


He is therefore not allowed to participate or be involved in any university duties, activities or functions, except those related to senior staff disciplinary committee (SSDC) during the period of suspension”.


Reacting to the allegation levelled against him, Igbafen said he was being framed by the school management.


“If you have been monitoring development in AAU, Ekpoma, you will not be surprised that a paper like that is coming from the university administration. It is the climax of a desperate Vice Chancellor who has so many things to hide, which we will bring to the press. We have been battling the Vice Chancellor who wants to impose himself to the University. I am doing my job as ASUU Chairman, there have been several attempts to compromise me, but I refused, and when they discovered that they are unable to compromise me, the next thing is to resort to blackmail.

Ask the Vice Chancellor, when did this issue of sexual harassment happened. The issue at stake is an attempt to cow the ASUU Chairman. We will address a world press conference to address the issue.”
Source: Daily post
By Rayesomo Charles at February 13, 2019
Email ThisBlogThis!Share to TwitterShare to FacebookShare to Pinterest