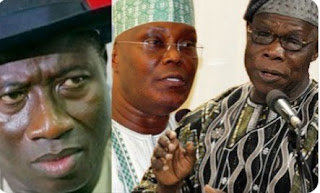 
The former governor of the state further stated that the former vice president Atiku headed the economic team during Obajanjo administration and initiated the privatization of government enterprises and sold government properties to themselves, which he added that has contributed to the nation’s economy predicament.
Adamu who spoke at Umashia in Toto local government area of the state, noted that during former presidents Obajanjo and Goodluck Jonathan crude oil was sold at the rate140 US dollars per barrel, adding that dollars was also sold between two to four hundred Naira per dollar lamented the wasteful years of the former administrations


According to him, prior to President Buhari administration dollar remained three hundred to four hundred Naira while crude oil dropped drastically to 32 US dollars per barrel.


He, however, revealed that the corrupt politicians are working tirelessly to ensure that he (PMB) did not return for the second term and are not happy with Buhari’s anti-corrupt war.

While re-reiterated his personal commitment to collaborate with the state and Federal government to end the persistence Bassa/Egbira tribal crisis in Toyo local government if re-elected for the third times in the forthcoming general elections.

Adamu, who lamented the situation where innocent people have been killed during the crisis, properties worth millions of Naira and the economy of the area brought to a halt, said if returned, concrete security measures would be taken to return peace to the area.

“We are going to collaborate with the state and federal government and take a drastic measures to ensure that perpetrators are being arrested and prosecuted to serve as a deterrent to others.”

‘We are going to take a drastic measures to find a lasting solution to the crisis,” senator expressed worry.


Adamu, however, assured the electorate in the area to address the persistence water problem, adding that if elected president Buhari for second term APC would construct Koto karefe bridge that would link up to Toto bridge.