80% Of ASUU members vote to continue the on going strike. 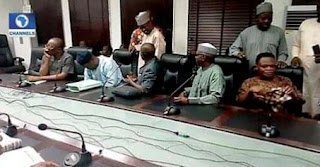 No fewer that 80% of members of the Academic Staff Union of Universities (ASUU) have voted for the continuation of the ongoing nationwide strike.
It was gathered that over 200 members of the University of Ibadan, UI, chapter of the Union who attended the congress voted for the continuation of the strike while a little above 50 voted for its suspension with conditions.

According to one of the ASUU members, the members who voted did not even consider the third option which states that the strike should be suspended with conditions. Speaking after the referendum, Dr. Deji Omole, Chairman of the University of Ibadan Chapter, said the referendum was conducted to know if the union should end the strike or not.


He affirmed that members voted for the continuation of the strike because the government is yet to meet all of its demand. ASUU and the Nigerian government are yet to come to an agreement on funds for the revitalisation of universities.


The union is demanding N50billion but the FG released only N25billion, saying it does not have N50billion. Speaking after the last meeting, Chris Ngige, Minister for Labour and Employment said, “We have met it halfway. We have offered what we have; we don’t have N50 billion.”

By Rayesomo Charles at February 06, 2019
Email ThisBlogThis!Share to TwitterShare to FacebookShare to Pinterest