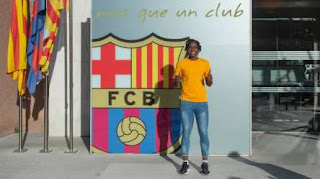 Super Falcons forward, Asisat Oshoala, has joined Barcelona Women’s club on loan from Chinese Dalian Quanjian until the end of current season.
The three-time African Women’s Footballer of the Year has before now stared for big clubs like Arsenal and Liverpool before she made the big money move to China.
It is understood that Oshoala arrived Barcelona on Thursday morning and subsequently underwent the mandatory medical examination before the loan deal was sealed.
Maria Teixidor, who is in charge of players transfer, and sports manager, Markel Zubizarreta, were present at Oshoala’s unveiling on Thursday.
“Obviously this is one of the best clubs in the world, the team has a great history and a good football mentality,” Oshoala told the official club website after signing the dotted lines.
She added: “I am excited about playing with Vicky Losada again. She’s a great midfielder, with a lot of energy and skill. I also met Fabiana in China and she helped me to make this decision”.


“My goal is to strengthen the team and help them to win and make history. This is a fantastic opportunity because I’m sure something big will happen here”.
Barcelona are presently second in the Primera División Femenina behind Atletico Madrid.
They would be playing against Albacete in the next round of games in the league.
Oshoala has been named African Footballer of the Year on three occasions (2017, 2016 & 2014). She won the Golden Boot and Golden Ball at the U20 World Cup in 2014. She was also top goalscorer in the Chinese Super League in 2017. 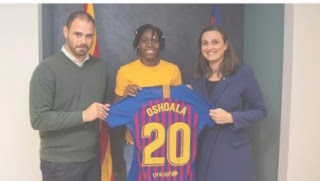 By Rayesomo Charles at January 31, 2019
Email ThisBlogThis!Share to TwitterShare to FacebookShare to Pinterest