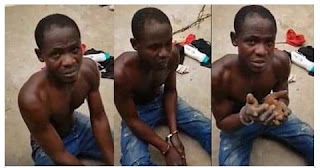 An infamous thief has been apprehended after stealing in the eastern part of Nigeria.


It was gathered that the suspect was traced to his home after a theft where shocking items were found in his possession during a search and Panties, bras, cream, ear rings, soap, cash among other items were recovered from his house.


He said he went to a house to steal only money but didn’t know the spirit that entered into him which made him to steal the underwear.


The serial thief said the panties and bras are of no use to him but decided to keep them in his house.

By Rayesomo Charles at January 25, 2019
Email ThisBlogThis!Share to TwitterShare to FacebookShare to Pinterest